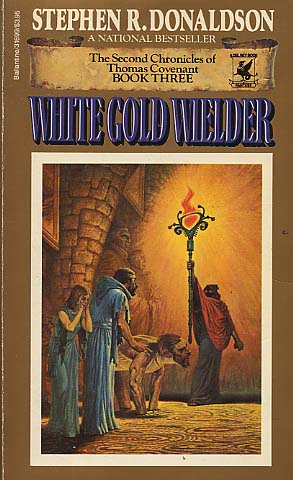 Share:
"...I WANT YOU TO GO BACK TO THE LAND. TO REVELSTONE. AND STOP THE CLAVE. PUT OUT THE BANEFIRE. IF YOU DO THAT, SUNBANE'LL SLOW DOWN. MAYBE IT'LL EVEN RECEDE. THAT'LL GIVE US TIME TO LOOK FOR A BETTER ANSWER."

Thomas Covenant was shocked by Linden Avery's demand; but he realized that, despite their awful failure on The Isle of The One Tree, there was no alternative but to return and fight. Mhoram had warned him: "...In the end, you must return to the Land."

After a long and arduous journey overland, the company reaches Revelstone. Following a fiery showdown with Gibbon Raver, Covenant discovers that he can come to terms with--and control--his awesome power.

As he readies himself for the final showdown with Lord Foul, the Despiser, Thomas Covenant knows he has the answer at last.