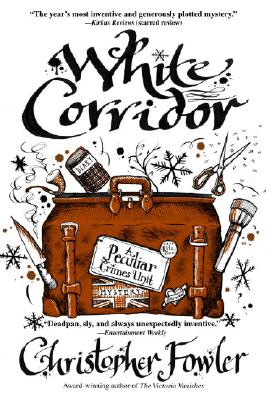 From using crackpot psychics to cutting-edge forensics, Arthur Bryant and John May are famous for their maddeningly unorthodox approach to solving crimes that the ordinary police cannot. Now Christopher Fowler, "a new master of the classical detective story,"* brings back crime detection's oddest--and oldest--couple to solve the ultimate locked room mystery.

It's an "impossible" crime--a member of the Peculiar Crimes Unit killed inside a locked autopsy room populated only by the dead and to which only four PCU members had a key. And to make matters worse, the Unit has been shut down for a forced "vacation" and Bryant and May are stuck in a van miles away in the Dartmoor countryside during a freak snowstorm on their way to a convention of psychics.

Now, with Sergeant Janice Longbright in charge at headquarters, Bryant and May must crack the case by cell phone while trying to stop a second murder without freezing to death. For among the line of snowed-in vehicles, a killer is on the prowl, a beautiful woman is on the run from a man who seeks either redemption or another victim, and an innocent child is caught in the middle.

Weaving together two electrifying cases, White Corridor is an unforgettable triumph--by turns hilarious and harrowing--as two of detective fiction's most marvelous characters confront one of human nature's darkest mysteries: the ability to deceive, deny, and destroy.
Reviews from Goodreads.com