Whispers of the Dead — Simon Beckett 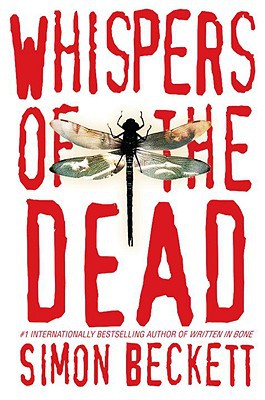 A field of corpses, laid out in a macabre display...A serial killer who confounds even the most seasoned profilers...A doctor whose life has been shattered by crime--plunged into the heart of a shocking investigation... In this masterful new novel by Simon Beckett, #1 internationally bestselling author of Written in Bone and The Chemistry of Death, forensic anthropologist David Hunter is thrust into his first murder investigation on U.S. soil--and his most devastating case yet.

In the heat of a Tennessee summer, Dr. Hunter has come to Knoxville's legendary "Body Farm"--the infamous field laboratory where law enforcement personnel study real corpses--to escape London and the violence that nearly destroyed his life. He's also here to find out if he's still up to the job of sorting through death in all its strange and terrible forms.... Hunter will soon find his answer when he's called to a crime scene in a remote Smoky Mountain cabin--a scene as grisly as it is bizarre.

The body is taped to a table. Everything about the crime scene--the wounds, the decomposition, the microscopic evidence--quickly short-circuits the tools and methods of forensic experts. Within days, Hunter knows he's dealing with a serial killer, someone intimately familiar with the intricacies of forensics. All around him, egos and hierarchies clash--from the boasts of a renowned criminal profiler to the dogged work of a young female investigator--but fate keeps pushing Hunter further into the heart of the manhunt. And the killer keeps coming up with surprises: booby-trapping corpses, faking times of death, swapping bodies--finally turning his sights on after Hunter himself....

An electrifying race against time, a fascinating journey into the world of forensic science, and a terrifying portrait of a killer in love with death itself, Whispers of the Dead is a thriller of the highest order.
Reviews from Goodreads.com