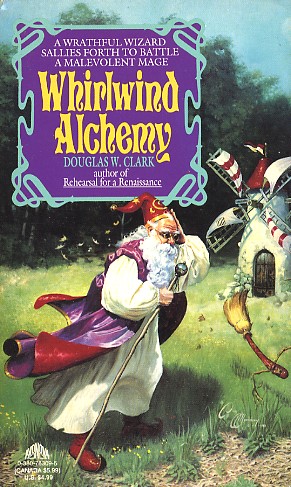 Tongues are wagging throughout the town of Pomme de Terre, concerning a scandalous new biography of Corwyn, the world's only aquatic alchemist. The lying tome portrays the venerable wizard as a fake--and, worse, a witless, bumbling fool! .

So the intrepid enchanter is off to Spain, to do ha with sinister windmills, demon-filled wineskins...and the scurrilous author who besmirched his good name. But Corwyn's absence will inadvertently leave the safety of Pomme de Terre in the less-than-capable hands of his inept assistant Sebastian--and at the mercy of the fiendish Hydro Phobius, who gleefully plots to unleash a plague of newly exorcised demons upon the unprotected community.
Reviews from Goodreads.com