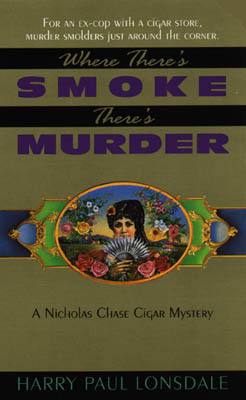 A Cigar Box...
Cambridge, Massachusetts, might be home to some of the country's greatest scholars, but its quaint, historic streets also host far more devious minds. Nick Chase is a former New York cop who's been minding his own business--a cigar store called The Happy Smoking Ground--for the past fifteen years, and he's happy to keep it that way. But murder has moved to Cambridge too.

...and a Pine Box
When Stanley Rupert, a cranky if loyal customer, is killed in his antique shop by someone he obviously knew, Nick is pulled into the investigation against his better judgment. Before he can say "Macanudo," Nick is thinking like a cop again, sorting clues and puffing his way through a dense web of lies and deceit. Soon he unwraps a cold-blooded fifty-year-old crime with three living witnesses, and a most incriminating agreement with all the earmarks of blackmail. Now Nick must figure out why Stanley had to die after all his years of prosperity in the antiques business--or a vicious killer might make sure Nick never opens a humidor again.
Reviews from Goodreads.com