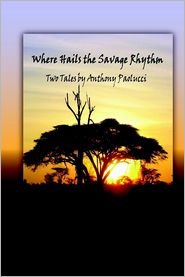 Bluesman is the story of Skinny Pete Johnson, who never achieved the notoriety of his peers. Resigned to the idea that his life has amounted to nothing, Pete decides to end it all, yet learns that death is not as easily attainable as he once thought. Before he can enter the afterlife, Pete must locate Big Mama Nell, a Chicago blues singer who is the key to his salvation. Can he convince her to do what she must in order for him to depart the world of the living?

Skin & Bones is the story of Jason Rose, high school student and drummer, who is under suspicion for murder. All evidence points to him, yet Jason clings to his innocence. The only way to clear his name is to solve the mystery himself. As the story unfolds, Jason undergoes a powerful change -- the manifestation of an African god who endows him with a unique ability. Taking full advantage of his newfound power, Jason must either track down the real killer or confront the possibility that the police had the right man all along.
* For mature readers
Reviews from Goodreads.com