When You Wish Upon a Star — Elizabeth Lim 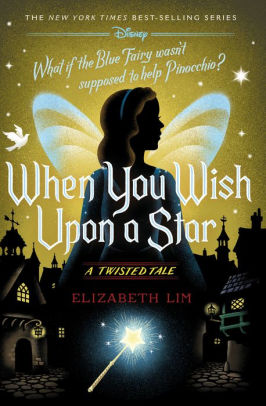 Share:
What if the Blue Fairy wasn't supposed to help Pinocchio? This New York Times best-selling series twists another Disney classic into a harrowing story in which the Blue Fairy defies fairy law, setting off a dramatic chain of events.Star light, star bright, first star I see tonight . . . So begins the wish that changes everything—for Geppetto, for the Blue Fairy, and for a little puppet named Pinocchio. The Blue Fairy isn't supposed to grant wishes in the small village of Pariva, but something about this one awakens some long-buried flicker within. Perhaps it's the hope she senses beneath the old man's loneliness.Or maybe it's the fact that long ago, before she was the Blue Fairy, she was a young woman named Chiara from this very village, one with a simple wish: to help others find happiness. Her sister, Ilaria, always teased her for this, for Ilaria had big dreams to leave their sleepy village and become a world-renowned opera singer. The two were close, despite their differences. While Ilaria would have given anything to have a fairy grant her wish, Chiara didn't believe in the lore for which their village was famous.Forty years later, Chiara, now the Blue Fairy, defies the rules of magic to help an old friend. But she's discovered by the Scarlet Fairy, formerly Ilaria, who, amid a decades-long grudge, holds the transgression against her sister. They decide to settle things through a good old-fashioned bet, with Pinocchio and Geppetto's fate hanging in the balance.Will the sisters find a way back to one another? Or is this, like many matters of the heart, a gamble that comes with strings?Try the other books in the A TWISTED TALE series: A Whole New World by Liz BraswellOnce Upon a Dream by Liz BraswellAs Old As Time by Liz BraswellReflection by Elizabeth LimPart of Your World by Liz BraswellMirror, Mirror by Jen CalonitaConceal, Don’t Feel by Jen CalonitaStraight On Till Morning by Liz BraswellSo This is Love by Elizabeth LimUnbirthday by Liz BraswellGo the Distance by Jen CalonitaWhat Once Was Mine by Liz BraswellAlmost There by Farrah Rochon