When I Give My Love — Antoinette Wrighton 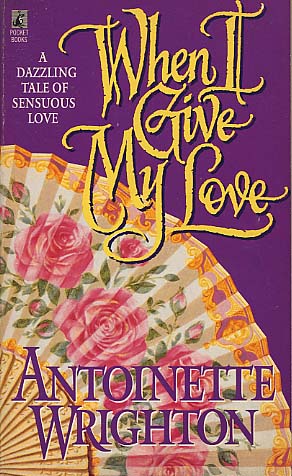 Share:
PRIDE SET HER WILL AGAINST HIM.
PASSION SURRENDERED HER HEART.

By order of the King of England, Raiven de Cortillion was to wed a stranger, and crockery smashed as her legendary temper flared. News of her defiance reached the king and soon led to an added decree: she must produce an heir within a year. Outraged, Raiven would not concede her life and feelings so easily. A sovereign could force her to marry, but only her heart could compel her to love. And never, she vowed, would she love Quynn St. Crowell.

Quynn had devoted his life to managing his inherited estate and to raising his fellow orphaned brother, all the while secretly harboring one wish that was his alone -- to fall in love. Now that dream was in peril, dashed by the whim of a seemingly ungrateful king whose life Quynn had once saved. But he never expected the tawny-haired beauty whose spirit rose to meet his in a war of wills. He vowed to win her wifely obedience by an assault of soft caresses and sweet seduction. Yet even as passion blazed between them, unyielding pride pitted them against each other. In this battle there could be no victors unless both learned to surrender -- flesh and feelings -- as equal partners able to fight all enemies to their lands...and their love.