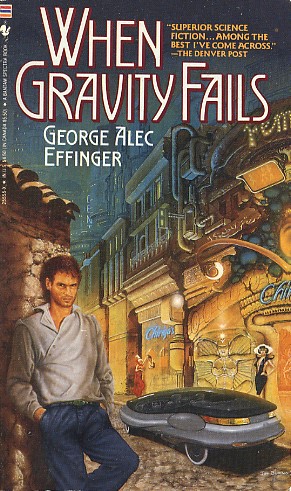 In a decadent world of cheap pleasures and easy death, Marid Audran has kept his independence and his identity the hard way. Still, like everything else in the Budayeen, he is available ...for a price.

For a new kind of killer roams the streets of the decadent Arabic ghetto, a madman whose bootlegged personality cartridges range from a sinister James Bond to a sadistic disemboweler named Khan. And Marid Audran has been made an offer he can't refuse.

The two-hundred-year-old "godfather" of crime in the Budayeen has enlisted Marid as his instrument of vengeance. But first Marid must undergo the most sophisticated of surgical implants before he dares to stop a killer with the powers of every psychopath since the beginning of time...

Wry, savage and unforgettable, When Gravity Fails is a major new work of dark genius by one of the most celebrated talents in science fiction today--a cutting-edge, heart-stopping tour-de-force detective story about an insane future world not so far removed from our own.
Reviews from Goodreads.com