When a Scot Loves a Lady — Katharine Ashe 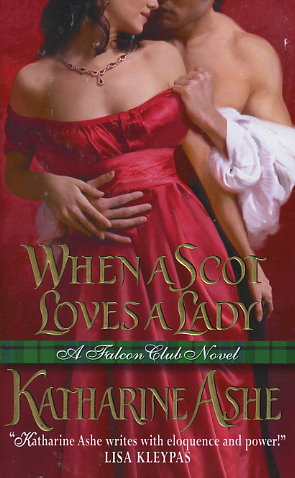 London gossips are asking: What use has society of an exclusive gentleman's club if no gentlemen are ever seen to pass through its door?

After years as an agent of the secret Falcon Club, Lord Leam Blackwood knows it's time to return home to Scotland. One temptation threatens his plans -- Kitty Savege, who warms his blood like a dram of fine whiskey. But a dangerous enemy stands in the way of desire, and to beat this foe Leam needs Kitty's help . . .

Kitty never wanted to spend her holidays in a wretched country village! With snow up to the windows, escape is nowhere in sight. A roguish Scottish lord, however, is. His rough brogue sends heat from Kitty's frigid toes to her chilled nose, but she's confident she can withstand that. What she cannot control is the reaction of her guarded heart when she discovers this beast is no beast at all . . .
Reviews from Goodreads.com

This new book by Katharine Ashe was excellent. I really enjoyed this book. It's about a Scot and a Lady. Of course the scot is Lord Leam Blackwood who has been a secret agent for the Falcon Club. He has returned after five years of service and retire to his home in Scotland. He only wants to leave every thing behind him and raise his son. But his plans are interrupted when the weather hampers his journey and is forced to stay at an inn. When Leam meets fellow travelers at the inn, he doesn't expect to find the one woman who he desires the most:Lady Kitty Savege .
Kitty couldn't believe her eyes when she saw the one man she desires the most: Lord Blackwood. Boy do the sparks fly when these two people come together. The author does an excellent story telling of two lost souls who are meant to be. I can't wait until the next book comes out titled "How to be a Proper Lady" in June 2012.