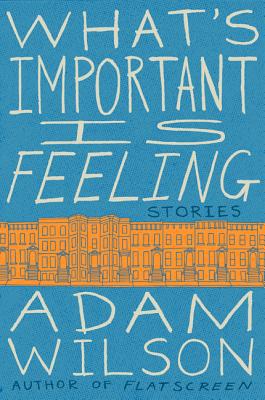 Bankers prowl Brooklyn bars on the eve of the stock market crash. A debate over Young Elvis versus Vegas Elvis turns existential. Detoxing junkies use a live lobster to spice up their love life. Students on summer break struggle to escape the orbit of a seemingly utopic communal house.

And in the title story, selected for The Best American Short Stories, two film school buddies working on a doomed project are left sizing up their own talent, hoping to come out on top -- but fearing they won't.

In What's Important Is Feeling, Adam Wilson follows the through-line of contemporary coming-of-age from the ravings of teenage lust to the staggering loneliness of proto-adulthood. He navigates the tough terrain of American life with a delicate balance of comedy and compassion, lyricism and unsparing straightforwardness. Wilson's characters wander through a purgatory of yearning, hope, and grief. No one emerges unscathed.
Reviews from Goodreads.com