What We Knew — Barbara Stewart 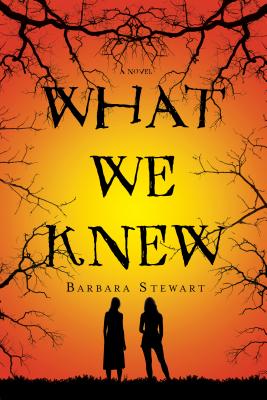 "When I was little, I imagined a monster: Scaly hands. Pits for eyes..."

When Tracy and her best friend, Lisa, were kids, stories about a man--a creep who exposes himself to little girls--kept them out of the woods and in their own backyards. But Tracy and Lisa aren't so little anymore, and the man in the woods is nothing but a silly story. Right?

But someone is in the woods. Someone is watching. And he knows all their secrets, secrets they can't tell anyone--not even each other.

Lisa's just being paranoid. At least that's what Tracy thinks. But when a disturbing "gift" confirms her worst fears, it sets the girls on a dangerous journey that takes them beyond the edge of the woods. They swiftly learn however that reality is more terrifying than the most chilling myth, and what they find will test the bonds of friendship, loyalty, and love.

"Once upon a time, two girls were lost in the woods."

In Barbara's Stewart's WHAT WE KNEW, Tracy and Lisa can't destroy the evil they'll face, but can they stop it from destroying each other?