What Matters Most — Kellie Coates Gilbert 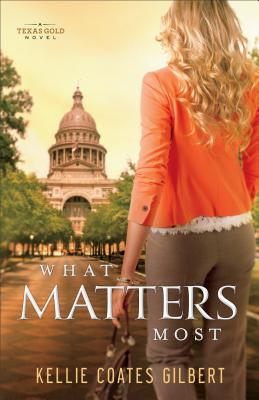 Leta Breckenridge is forced to drop out of college to care for her dementia-ridden mother. After learning a severely delinquent account may force her mother into a less desirable facility, Leta steps out of her comfort zone and lands a high-paying job at an Austin public relations firm. But her dream job turns into a nightmare when she learns the firm is a front for a political opposition machine--and that the research she's been collecting will be used against her new love interest, Nathan Emerson.

Nathan is a rising political star being pressured to run a bid to unseat the current governor of Texas. He's already in a relationship with a woman much better suited to be a politician's wife, but he's never met anyone like Leta. Could this feisty, challenging woman hold the key to his heart?
Reviews from Goodreads.com