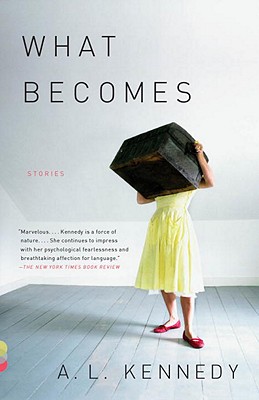 Twice selected for Granta's list of Best Young British Novelists, winner of the 2007 Costa Book Award for her acclaimed novel Day ("Day is a novel of extraordinary complexity" -- The New York Review of Books), which was also chosen as one of New York magazine's top ten books of the year -- the internationally revered A. L. Kennedy returns with a story collection whose glorious wit and vitality make this a not-to-be-missed addition to the canon of one of our most formidable young writers.

No one captures the spirit of our times like A. L. Kennedy, with her dark humor, poignant hopefulness, and brilliant evocation of contemporary social and spiritual malaise. In the title story, a man abandons his indifferent wife and wanders into a small-town movie theater where he finds himself just as invisible as he was at home. In the masterfully comic "Saturday Teatime," a woman trying to relax in a flotation tank is hijacked by memories of her past. In "Whole Family with Young Children Devastated," a woman, inadvertently drawn into a stranger's marital dysfunction, meditates on the failings of modern life as seen through late-night television and early-morning walks.

Powerful and funny, intimate and profound, the stories in What Becomes are further proof that Kennedy is one of the most dazzling and inventive writers of her generation.
Reviews from Goodreads.com