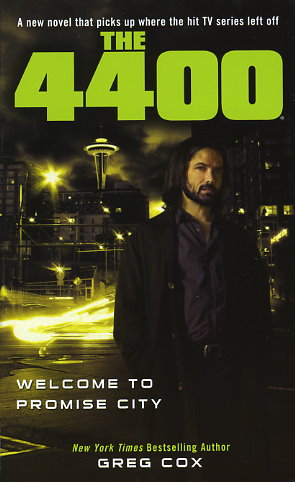 The 4400 were only the beginning. Now anyone can become extraordinary. The rewards are great. But so are the risks. . .

Mere months have passed since a viral outbreak transformed Seattle. Over nine thousand people died horribly, while thousands more gained remarkable new abilities. The disaster has also left Jordan Collier, the charismatic leader of The 4400 Movement, in charge of the city, much to the dismay of the rest of the world.

To Collier's followers, the birth of "Promise City" heralds the dawn of a glorious new future that will forever change the face of humanity. But not everyone welcomes Collier's vision of tomorrow. An internationalconspiracy, composed of many of the world's most powerful figures, will stop at nothing to destroy the Movement, even if it means igniting an all-out war against Promise City.

NTACNTAC agents Tom Baldwin and Diana Skouris find themselves caught in the middle of a historic clash as they try to save Seattle from both Jordan Collier and his mortal enemies...with the future of the planet hanging in the balance.

The saga of The 4400 continues.
Reviews from Goodreads.com