Wedding Souffle and a Dead Valet — A. Gardner 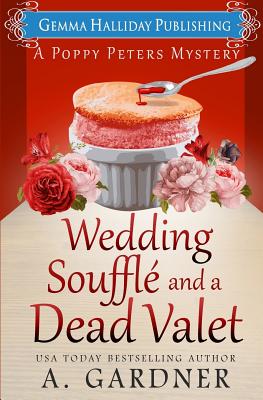 Share:
From USA Today bestselling author A. Gardner comes the next to-die-for Poppy Peters mystery... Poppy Peters, accidental sleuth and unemployed pastry chef, is back in Europe attending a friend's wedding. But when a parking valet for the big event turns up dead in the front seat of an antique car, Poppy learns that the little English village of Woodbury isn't all scones and clotted cream. Determined to help the bride and groom, she follows the killer's trail which leads her from the local bakery to a grand estate owned by the town's infamous Lord Chutney. Poppy quickly discovers that the village is keeping a deadly secret. Between a disgruntled shopkeeper, spiteful townsfolk, and a missing bridesmaid, Poppy is convinced that the murderer is living just a cottage away. And may have his sights on her as the next victim. **Recipes included!** Poppy Peters Mysteries: Southern Peach Pie & A Dead Guy (book #1) Chocolate Macaroons and a Dead Groom (book #2) Ice Cream Bombes and Stolen Thongs (short story in the "Killer Beach Reads" collection) Bananas Foster and a Dead Mobster (book #3) Strawberry Tartlets and a Dead Starlet (book #4) Wedding Soufflé and a Dead Valet (book #5) What critics are saying: "A charming cozy mystery featuring likable characters. A. Gardner does a marvelous job at keeping the storyline fresh and entertaining. I look forward to seeing what surprises A. Gardner has in store for us next!" —Fresh Fiction "If you are a fan of tasty mysteries that showcase delectable desserts and a strong heroine, this is one to pick up." —Night Owl Reviews "One of the best perks of summer is eating a warm slice of Georgia peach pie. Throw in a murder and you’ve got the makings of a juicy cozy mystery. Southern Peach Pie and a Dead Guy: A Poppy Peters Mystery by debut author A. Gardner is a delicious e-book." —MomTrends, Ebook Pick for Summer