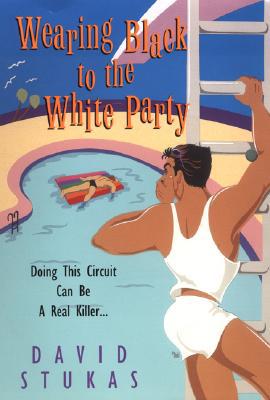 Mama said there'd be days like this. That's the refrain running through Robert's modest, Midwestern mind as he and Michael are driven to the home of party promoter Rex Gifford by the mogul's naked manservant, Vince. Never mind that the guy is sporting enough hardware in his not-so-software to be a human wind chime. Or that Michael's managed to join the mile-high club on the way down. Or that Rex's plan for a Red Party to rival the celebrated White Party has started an all-out war among the gay mafia controlling the circuit party world. At least the pool is heated, the decor is gorgeous, and they can hang out with Monette, who's in town for the Dinah Shore classic.

Someone's moved up from sending threatening letters to Rex's T-Rex Productions to actually trying to kill him. It isn't long before Rex is found face-down in his lap pool, and the trio's vacation turns into a working one. With millions of dollars and exclusive party contracts at stake, anyone could be a suspect. But when another buff bod goes stiff, it's obvious that someone is determined to keep the Red Party from ever getting off the ground, and as the DJs start spinning, the world's cattiest sleuths are going to have to seriously work every bit of the nightlife just to stay one step ahead of a ruthless killer...

In this third outrageous mystery from David Stukas, the bodies are bronzed, the one-liners are fast and furious, the tension is high, and the circuit life will never be the same again.
Reviews from Goodreads.com