We All Fall Down — Michael Harvey 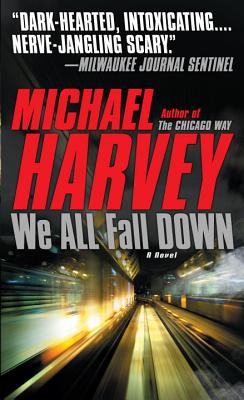 Chicago cop turned private investigator Michael Kelly is racing to save his city from a deadly new foe: a biological weapon unleashed underground.

When a lightbulb falls in a subway tunnel, it releases a pathogen that could kill millions. While the mayor postures, people begin to die, especially on the city's grim West Side. Hospitals become morgues. L trains are converted into rolling hearses. Finally, the government acts, sealing off entire sections of the city -- but are they keeping people out or in? Meanwhile, Michael Kelly's hunt for the people who poisoned his city takes him into the tangled underworld of Chicago's West Side gangs and the even more frightening world of black biology -- an elite discipline emerging from the nation's premier labs, where scientists play God and will stop at nothing to preserve their secrecy.

It's a brave new world . . . and the most audacious page-turner yet from an emerging modern master.
Reviews from Goodreads.com

A Blue Line train in Chicago is going faster than it should. The vibrations of the train's passage loostens a light bulb, causing it to fall and break. Soon, people begin to get sick and die.

P.I. Michael Kelly is called to help with security when it is determined that there could be a threat of a biological weapon on the Chicago railway.

More and more people die. The Dept. of Homeland security decides to quarantine part of the city. This gives some criminals the opportunity to rid themselver of their rivals. Burning of buildings and looting begins.

Dr. Ellen Brazile leads the charge in attempting to identify the pathogen and develop a vaccine. Kelly continues to search for those responsible for unleashing this killer in Chicago.

It is easy for the reader to immerse themselves into this fearful setting. The action is portrayed realistically providing an entertaining reading experience.