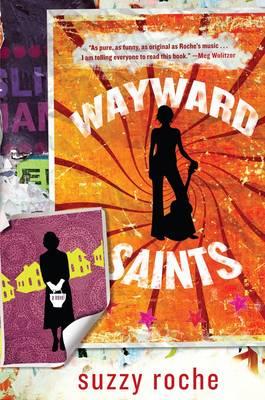 Mary Saint, the rule-breaking, troubled former lead singer of the almost-famous band Sliced Ham, has pretty much given up on music after the trauma of her band member and lover Garbagio's death seven years earlier. Instead, with the help of her best friend, Thaddeus, she is trying to piece her life together while making mochaccinos in San Francisco. Meanwhile, back in her hometown of Swallow, New York, her mother, Jean Saint, struggles with her own ghosts.

When Mary is invited to give a concert at her old high school, Jean is thrilled, though she's worried about what Father Benedict and her neighbors will think of songs such as "Sewer Flower" and "You're a Pig." But she soon realizes that there are going to be bigger problems when the whole town--including a discouraged teacher and a baker who's anything but sweet--gets in on the act.

Filled with characters that are wild and original, yet still familiar and warm--plus plenty of great insider winks at the music industry--Wayward Saints is a touching and hilarious look at confronting your past and going home again.
Reviews from Goodreads.com