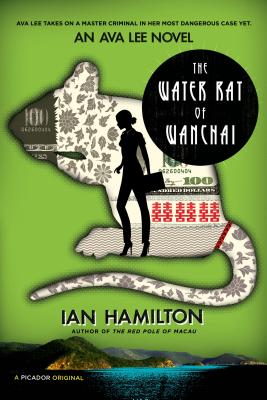 In Ian Hamilton's The Water Rat of Wanchai, we meet forensic accountant and martial arts expert Ava Lee in her early days working for the mysterious businessman Uncle as they track down large sums of money that have disappeared. One of Uncle's longtime friends has requested help for his nephew, who needs to recover five million dollars from a business deal that went sideways. Ava steps in and immediately is off on a global hunt for the missing money that has her dodging shady characters.

On a journey that takes her from Seattle to Hong Kong, Bangkok, Guyana, and the British Virgin Islands, Ava encounters everything from the Thai katoey culture to corrupt government officials. In Guyana she meets her match: Captain Robbins, a godfather-like figure who controls the police, politicians, and criminals alike. In exchange for his help, Robbins decides he wants a piece of Ava's five million dollars and will do whatever it takes to get his fair share.
Reviews from Goodreads.com

I must admit that i got this book first because it was recommended to me, but also because I loved the title. The book really did not disappoint. There's something about a young Asian, Canadian woman who is a master in martial arts and a forensic accountant to boot. The book is a quick read, and the plot moves along at a great pace. We go from Toronto, to Hong Kong, to Bangkok, to Guayana to the British Virgin Islands. Ava Lee is a new generation protagonist. Smart tough and resourceful. In the book Ava and Uncle are trying to return 5 million dollars in money that was taken on a fraudulant shrimp deal. The book really portrays the extent of political corruption in some of our smaller and isolated third-world countries in the world. It makes doing business in these countries interesting and challenging, and only someone with superior skills can manage it. Ava certainly is a unique character and I can't wait to read more about her.