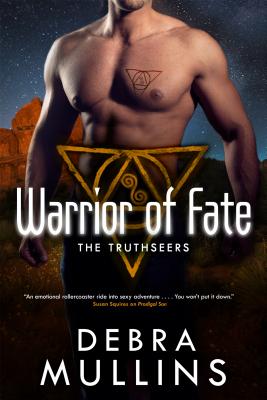 Award-winning author Debra Mullins introduced readers to the world of the Truthseers in Prodigal Son and Heart of Stone. Now the story of the lost Atlanteans continues in Warrior of Fate.

Warrior Adrian Gray has dedicated his life in service to his people, and has never doubted his calling...until now. Three mystical Atlantean power stones were assumed lost for centuries, but one by one the Seers of Atlantis have tracked them down in a tireless race against the extremist Mendukati. Adrian's mission? To ensure that the stones are acquired and protected by the right people―his people.

Adrian has always been uncompromising in his dedication to the cause. But the True Seer Tessa Montana proves a sensual distraction in his quest, and he soon finds his discipline wavering. Torn between his sacred duty to the Warriors and his desire for Tessa, will Adrian and his secrets cost them the war?
Reviews from Goodreads.com