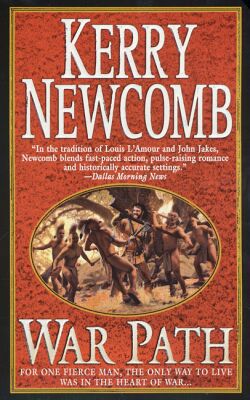 IN A WILDERNESS BURNING WITH WAR, JOHN STARK HAD NO PLACE TO HIDE, AND ONLY ONE PLACE LEFT TO GO...

"Johnny Stark was big, ugly, and wasn't about to die..." So begins this extraordinary saga set on America's first frontier--in the heart of the French and Indian War. Stark was a hunter whose crime was running afoul of an Abenaki war party. Fighting his way out of a blood-soaked killing ground, Stark became a legend in a land torn by a brutal struggle between two distant nations, with native tribes choosing sides. In danger of losing their stake in the New World, the French knew they had to bring down Johnny Stark and prove he was mortal. But the big colonial had a secret weapon: a woman half his size, just as brave, and twice as good with a gun.

WAR PATH
A vivid and unforgettable adventure in American history, this is the towering adventure of men and women in a land burning with war, betrayal, atrocities and intrigue--a land whose future belonged to the fortunate and the brave.
Reviews from Goodreads.com