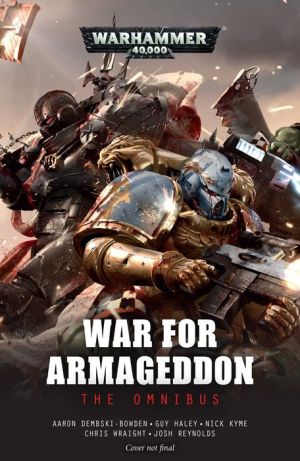 Space Marines from multiple Chapters unite alongside Titan Legions and the Astra Militarum to defend the world of Armageddon from ork warlord Ghazghkull Thraka.

In the bleak 41st millennium, the planet Armageddon is on the cusp of annihilation. The strategically vital hive world has captured the attention of infamous ork warlord Ghazghkull Thraka, and when the Astra Militarum and whole Titan Legions prove unable to halt the invasion, it is feared that both the planet and the wider sector will be lost to the greenskins. But the Imperium refuses to succumb and unleashes the Space Marines - genetically engineered warriors who thirst for naught but blood and victory. But can even this alliance of mankind's greatest warriors hope to turn the tide against Ghazghkull and his endless ork horde? This high-octane omnibus contains the classic novel Helsreach by New York Times bestselling author Aaron Dembski-Bowden, alongside four novellas and a host of short stories by some of Black Library best-known authors, including Guy Haley, Nick Kyme, Chris Wraight and Josh Reynolds.
Reviews from Goodreads.com