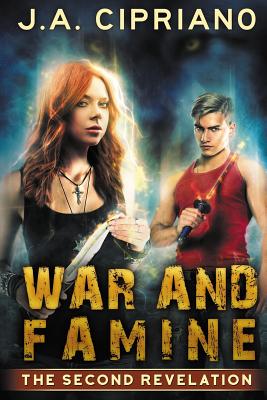 A broken God. An impossible lock. An unlikely hero.

They killed the world serpent and saved the girl. They stopped Ragnarok. They should be celebrating.

Fenris, the eldest of Loki's monstrous children, is determined to break free of the rope that binds him.

And when he does, even the sun and the moon won't be able to sate him.
War and Famine is the second book in Revelations series, an urban fantasy series. Readers who enjoyed Jim Butcher's The Dresden Files, Patricia Brigg's Mercy Thompson series, or Kevin Hearne's The Iron Druid Chronicles will likely enjoy this paranormal adventure.
*Book 1: Death's Mantle (ASIN: B019MO3Y16) is on sale for only $2.99!*
Reviews from Goodreads.com