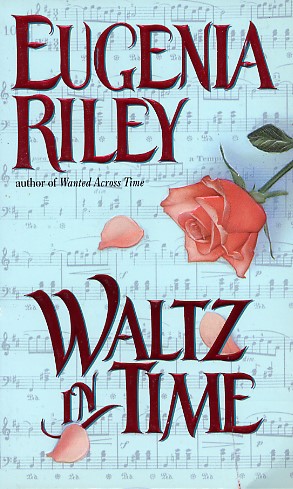 MATCHMAKER'S MASQUERADE
When Stephanie Sergeant inherited a rambling old mansion in Natchez, Mississippi, she had no idea she'd have to share it with the ghost of a lovelorn Victorian spinster. Now the haunting strains of a violin disturb her sleep each night. And when she does dream, her late Great-aunt Magnolia comes to call, complaining that "someone has to deal with that man." Traveling back in time to play matchmaker, Stephanie seeks to pair up the lonely spinster with a notorious Southern rogue . . . But she soon finds herself in the arms of a devilishly charming prospective with ideas of his own.

WALTZ IN TIME
A handsome, broad-shouldered widower, Andre Goddard is thrilled to have finally found someone like Stephanie who can match his passion and fire --- and who is firm, yet loving, toward his five rambunctious children. Of course, the headstrong woman's infuriating insistence that she has come from the future to unite Andre with his shy, dowdy housekeeper is a serious obstacle to his romantic plans. And Stephanie is certain she could never give her heart to such an incorrigible rascal, even one as attractive as Andre. But the unexpected tenderness she experiences in Andre's embrace tantalizes her with the sensuous promise of a love that could make time stand still for them both.
Reviews from Goodreads.com