Walla Walla Suite (A Room With No View) — Anne Argula 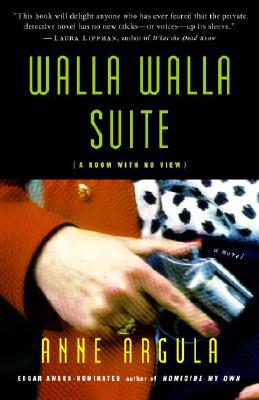 Quinn, a newly divorced ex-cop, retains custody of her wild hot flashes, her twisted tongue, her fey sense of humor, and her propensity for trouble. Now trying to get a foothold as a P.I. in a new city, Quinn takes what she thinks will be a safe job with Vincent Ainge, to whom she is oddly attracted. Vincent, who has his own demons, is the only mitigation investigator in the Northwest working to save the lives of convicted killers from ending at the gallows in Walla Walla state prison.

When a young secretary named Eileen vanishes, the woman's boss hires Quinn to track her down. What looks like a missing-person case turns out to be anything but, sucking into its wake Vincent, his demented father, Eileen's barely legitimate boss, her sexually vulnerable mother, a serial rapist and possible serial killer, and, of course, Quinn herself. Quinn's improvised investigation takes her to the dangerous dark corners of the human psyche and casts suspicion where she least expects it, which will ignite a burst of violence and a resolution that readers won't see coming.
Reviews from Goodreads.com