Voice of the Falconer — David Blixt 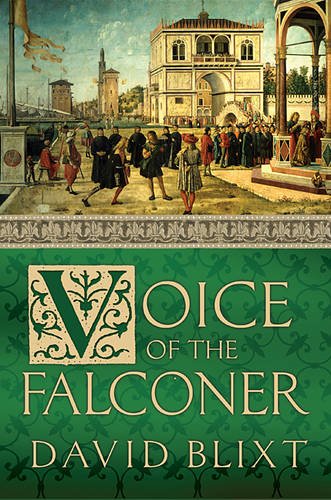 Share:
In the tradition of Dorothy Dunnett and Bernard Cornwell, David Blixt's latest volume in his historical epic of early Renaissance Italy picks up eight years after the end of The Master of Verona. Having been placed in charge of 'Cesco -- the bastard child reputed to be the only male progeny of Francesco ('Cangrande') della Scala -- the political & economic leader of Verona -- Pietro Alaghieri has been raising the child in exile in Ravenna. Now 1325 and the word goes out that Cangrande has died -- now the question of succession is in the air and the only viable option is the unpleasant nephew, Mastino, now sixteen.
In Ravenna, Dante Alaghieri, Pietro's father, has been dead for some years and while he was reviled in life, in death his former hometown wishes to claim him -- and his body -- for themselves. Even if it means hiring grave-robbers. But robbers are the least of Pietro's concerns -- Cesco is beginning to figure out that there's something unusual about his parentage that is being kept from him, and someone else has apparently figured out the riddle of 'Cesco's parentage and is determined to take him out of the picture. With all of their lives at stake, not to mention the tentative peace of Italy, Pietro must act to protect them all. But far behind the scenes is a mastermind pulling everyone's strings -- one who stands to lose, or gain, the most.