Visions of the Heart — Emily Carmichael 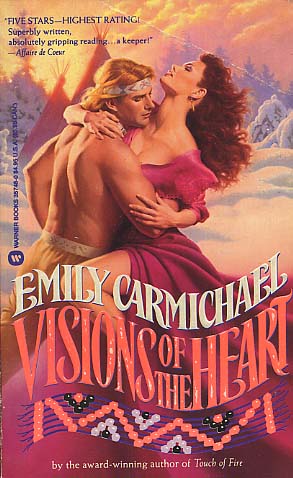 Share:
CAPTIVE LOVE
Miri Sutcliffe's wedding plans -- and the future she thought was hers -- were utterly destroyed by the war between England and America. Her handsome fiance was on the run for treason, and soon the lovely aristocrat herself, wrongfully accused of the crime, was boldly fleeing from her native land into the wilds of America.

But uppercrust London had not prepared demure Miri for the rugged Northwest ... for the stormy winds that tipped her canoe into icy Lake Huron ... for the splendid, strange savage who rescued her. He was tall, lean, and bronzed like his Chippewa brothers, yet his hair was the color of maize. Now this white Indian held her fate in his hands -- strong hands that tempted her, caressed her, aroused her. Even as she fought him, Miri could not win the battle that raged within her soul, the ravaging need to become a complete woman ... a thirst that could only be slaked by total, ecstatic surrender.