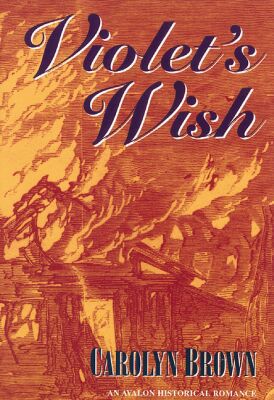 Violet did. After her husband died, she swore off lackluster men and a dull life. She wished for someone to put a sparkle in her eyes and excitement in her life, like an old love did year ago in Blue Ridge, Texas. Little did she realize that when she made the wish it was already in the process of being granted.

Orrin Wilde did. He wished he'd never chose the lure of the gold mines over the love of his life. But his sins are coming back, screaming for payment. Four bandits follow Orrin for days and finally catch up with him outside of Guthrie, in Oklahoma Indian Territory. He tries to outrun them, when they wing him. He rides down Main Street and, unable to find a doctor, he crawls up on the porch of the last house in town. Violet hears the thud when he falls and finds him bleeding and unconscious on her front porch.

If Violet had been doing the shooting, Orrin would be graveyard-dead. Eight years before, he ruined her reputation; now, he was ruining it again. Orrin still loves Violet, but after the trouble down in Texas she refuses to trust him.

Suddenly they wonder why they ever made such crazy wishes after all. Will they ever find forgiveness in their hearts for past mistakes and go on to a love-filled future?