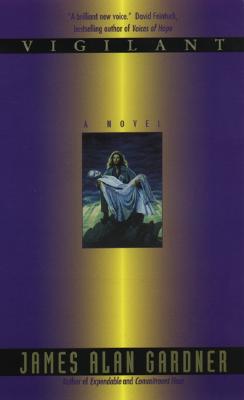 Share:
THE PRICE OF LIBERTY IS ETERNAL VIGILANCE. EVEN ON ANOTHER PLANET.

Two species lived in peaceful coexistence on the planet Demoth until a deadly plague wiped out millions of the winged Ooloms while leaving humans untouched, helpless to do more than ease the suffering of their alien frienils and neighbors. Faye Smallwood saw the horror firsthand, caring for the plague victims in her father's hospital. She was there when he discovered the cure that made him famous. She was also there when a freak accident killed him.

Desperate to escape her past, Faye joins the Vigil, a band of fiercely independent monitors charged with rooting out government corruption. To help in this struggle, her mind is linked to the powerful datasphere that regulates the planet...and suddenly, she receives a cryptic vision promising peace and healing. Instead, Faye becomes the target of unknown assassins in a sinister conspiracy that threatens to unleash a new and more deadly outbreak.

For humans and Ooloms were not the first species to inhabit Demoth. Somewhere in the ruins of long-abandoned settlements, something was left behind: an alien technology of unimaginable potential to build--or destroy. Enemy agents will stop at nothing to find it. Some of Faye's own people will kill to uncover its secret. With no one else to trust, she turns to the one person who can help unravel the mystery: Festina Ramos--explorer, outcast, ever-vigilant champion of those whom society deems expendable.