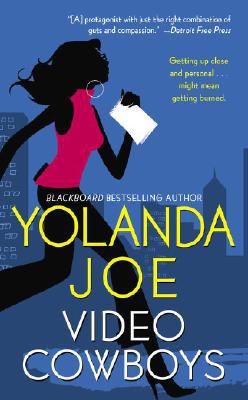 Share:
Straight-talking, crime-busting TV news reporter Georgia Barnett is back again in another smart and sassy mystery by Blackboard bestselling author Yolanda Joe. This time, Georgia's faced with a life-and-death hostage situation -- with precious little time to solve a complex mystery and save a lifelong friend.

In this latest comic mystery by acclaimed novelist Yolanda Joe, Georgia Barnett and her cameraman/ partner, Zeke, are minding their own business on an errand at the bank when they suddenly find themselves in the middle of a dangerous, and unusual, bank robbery. They quickly find out that the gunman, Brett, isn't looking for money. What he really wants is a major media outlet. The police have ignored his pleas to help find his missing daughter. So Georgia manages to strike a deal: in exchange for her investigative powers and televised appeals to the public for information about Brett's daughter, Georgia will walk free. Brett may be a loose cannon, but he's sharp as a tack and, much to Georgia's dismay, decides to hold on to Zeke as collateral.

With a trigger-happy police force and bomb-wielding Brett, Georgia is under the gun, literally, to find Brett's daughter and save Zeke from the crossfire. Her boyfriend, Doug, a tough, handsome, get-'em-at-any-cost cop who works high-profile cases in the Windy City, happens to be away on assignment. Thankfully, Georgia finds an unlikely crew of cohorts in the Video Cowboys -- three of Zeke's fellow cameramen who contribute stories to the local TV stations. Put out to pasture because they were deemed too old to keep up with the demands of the job and the changing technology, the Cowboys are hell-bent on saving Zeke and proving that they've still got the chops to tough it out in the rough-and-tumble world of TV news.

Their fast-paced investigation leads them all over Chicago. Time is running out, even as Georgia and the Cowboys hang on during a high-speed car chase, survive a shoot-out, and uncover an intricate drug scandal. Brett's daughter might not be an innocent kidnap victim. And Brett may not be the only threat to Georgia and Zeke's lives...