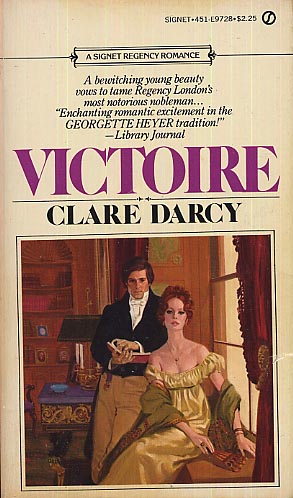 Sparkling young Victoire Duvernay made her first appearance in Regency England posing as her cousin who had been shamefully wronged by the dashing, devastatingly handsome rake, the Marquis of Tarn. But soon she emerged under her own name as the leading light of the London season, with the hot-blooded, hot-tempered Tarn dancing attendance upon her, and a host of gallants, fortune-hunters, and rogues swarming around her.

Victoire seemed such a defenseless innocent in this sophisticated world of elegant snobbery and cruel deception. But Victoire had no intention of becoming anyone's pawn or prey. Instead this captivating young lady was determined to give the most arrogant gentleman in all the realm an unforgettable lesson in love....
-------------------------
UK Edition

The Marquis of Tarn's family were not surprised to be told that he had broken the heart and ruined the reputation of a girl in Ireland, but they were surprised at the extremely pretty, shy young lady who was produced as his victim. Fortunately the Marquis arrived in time to proclaim Victoire Duvenay an arrant imposter, but not before Victoire, an unwilling cat's-paw in her cousin's scheme, had come to the same embarrassing conclusion.

But Victoire, not so defenceless and gullible as she seems, has no intention of becoming anyone's pawn or prey. Emerging as a leading light of the London season, she soon has the hot-tempered Tarn dancing attendance upon her, and a host of rakes, fortune hunters, and rogues swarming around. Despite the rivalry of a beautiful Condessa who does not intend to lose Tarn to anyone, the machinations of Tarn's cousin who plots to inherit the title, and the designs of a handsome young officer from her own past, she sets out to tame the notoriously arrogant Marquis, and teach him an unforgettable lesson in love.