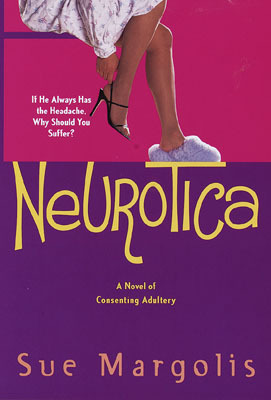 Share:
If he always has the headache, why should you suffer?

In the bestselling tradition of Bridget Jones's Diary comes this outrageous, hilarious look at love, marriage, and sex, introducing Anna Shapiro, who believes that surely there must be more to married life....

Tabloid reporter Anna Shapiro can pinpoint the day, three years ago, that she and her husband, Dan, last had great sex. Anna would be grateful if something as ordinary as a mere headache was her husband's excuse; Dan's hypochondriac terrors include brain tumors, tropical diseases, and spontaneous combustion. While she loves her husband, she's not ready to give up on sex at age thirty-seven--so what can she do?

It's the perfect time for the distraction of a freelance assignment. But what her editor has in mind is a story on the explosive new feminist manifesto that prescribes no-strings-attached affairs for women. Anna's assignment is to interview three women who've had extramarital affairs purely for sexual pleasure--but she's inclined to take her research a bit further....

Can a woman have an uncomplicated affair purely for sexual pleasure--or do her emotions invariably interfere? Anna's determined to find out. And despite her worries about her middle-aged body, potential research assistants prove to be plentiful.

Going where no journalist has gone before, Anna delves into a world she'd never considered until now. What is, after all, the perfect outfit for committing adultery in? Is it truly beyond the pale to pick up a man--no matter how sexy he is--at a funeral? And what can be done about that single horrifying gray hair? The answers are more hilarious than Anna could ever have predicted.

But soon Anna finds herself facing the question that she never thought she'd have to answer: Is she willing to give up her marriage and her children for what may be the biggest gamble of her life?

A novel for every woman who's ever wondered--and every woman who hasn't--Neurotica will have you roaring with laughter as it takes you on a wickedly delightful journey of sheer indulgence.