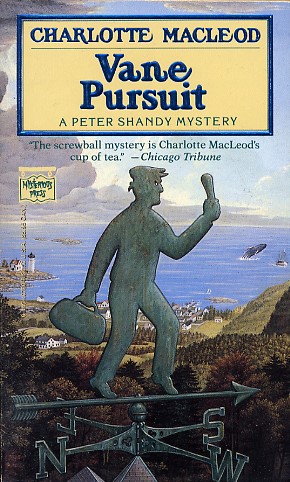 Share:
A dastardly gang of rogues is sneaking around Balaclava county, snatching priceless antique Praxiteles Lumpkin weathervanes. Before they disappear entirely, Helen Shandy decides to photograph several of them for the Balaclava Historical Society files.

A good thing, too. Helen gets a shot of the vane atop the Lumpkin Soap Factory only hours before the thieves set the building ablaze -- the fatal fire having begun as the result of the misfiring of a nearby Civil War cannon.

After this catastrophe, Helen travels to Maine to photograph one of the last vanes standing in its natural habitat. Relaxing with a bit of whale-watching, her boat is immediately shanghaied by the sane-snatching gang.

Back home, blissfully unaware of Helen's hapless plight, Peter Shandy does battle with a shaggy group of demented survivalists. He bounces back just in time to come to Helen's aid . . . and to round up a gang of the most villainous felons in Balaclava county history.