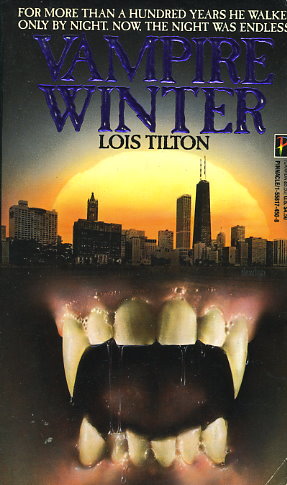 Share:
THE TOMB CRACKED
Kittredge felt the shock deep in his vault an hour before dusk. The reinforced concrete walls cracked like eggshells: the steel door seemed to melt. Something was wrong and as he felt the heat that blasted past his tomb, the vampire tasted fear. In an hour, when the sun had set, he would emerge to feed and see what had happened.

THE VAMPIRE WALKED
What he saw stilled even his bloodlust. Chicago was a ruin, burning on the horizon. The destruction seemed total, but he had to find survivors: if no one lived, he would not be able to feed. And he had to avoid the flames flaring everywhere. He could feel the skin on his face blistering even at a distance, and fire was as deadly to him as the rays of the sun. The vampire needed shelter and he needed blood. At the first farmhouse, he discovered both.

And Kittredge also discovered that he could hunt his prey whenever he wanted to, that all the hours of the day belonged to him. Because whatever had happened when he last slept in the darkness of his tomb, the result for him was that the sun was blocked from sight. He would be the hunter both day and night. And the vampire was hungry.