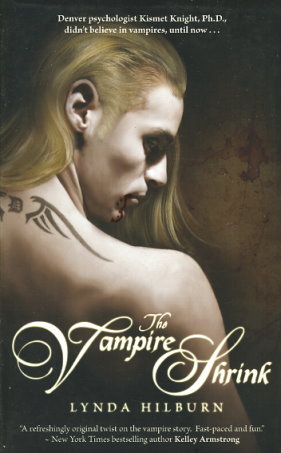 Share:
Denver psychologist Kismet Knight, Ph.D., doesn't believe in the paranormal. She especially doesn't believe in vampires. That is, until a new client introduces Kismet to the vampire underworld and a- drop dead gorgeous, 800-year-old vampire named Devereux. Kismet isn't buying the vampire story, but can't explain why she has such odd reactions and feelings whenever Devereux is near. Kismet is soon forced to open her mind to other possibilities, however, when she is visited by two angry bloodsuckers who would like nothing better than to challenge Devereux by hurting Kismet. .

To make life just a bit more complicated, one of Kismet's clients shows up in her office almost completely drained of blood, and Kismet finds herself immersed in an ongoing murder investigation. Enter handsome FBI profiler Alan Stevens who warns her that vampires are very real. And one is a murderer. A murderer who is after her.

In the midst of it all, Kismet realizes she has feelings for both the vampire and the profiler. But though she cares for each of the men, facing the reality that vampires exist is enough of a challenge ... for now.