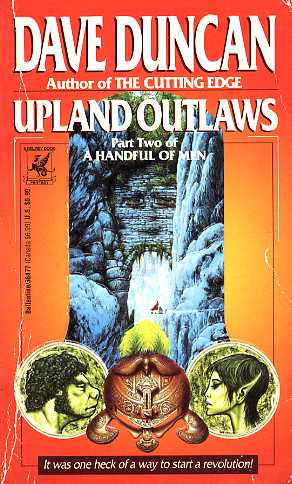 The power-mad dwarf-sorcerer Zinixo had driven Emshandar V from his throne. He had shattered the ancient Protocol that kept tenuous peace among Pandemia's warlocks. And his conquest had only begun.

Somehow the deposed Imperor had escaped his clutches--so far--but Shandie would soon be found. Then the Impire would be Zinixo's alone. Outlying countries would fall beneath his fist. And at long last, he could wreak fabulous revenge upon Rap of Krasnegar. For Zinixo wielded the greatest magic ever imagined: an army of slave-sorcerers bound to serve his every whim--to the death.

No one could stop him: Shandie had scarcely an ally in the world; Rap's magical powers were a shadow of their former strength; and there was hardly a free sorcerer to be found in all Pandemia. Where could any resistance effort find even...A Handful of Men?