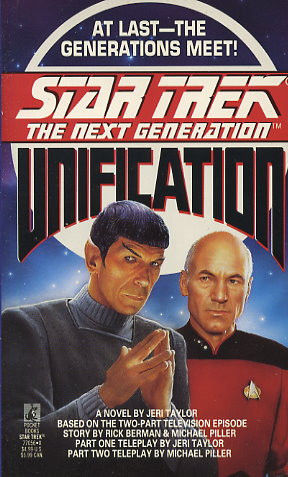 Share:
Based on the epic two-part television episode, here now is the story STAR TREK fans have awaited for five long years, the story that brings together Spock--the enigmatic Vulcan who personified the original, classic STAR TREK--with the crew of the Next Generation.

Screenwriter Jeri Taylor brings all the excitement and wonder that have captivated fans of the smash television series STAR TREK: THE NEXT GENERATION to this story of Spock's forbidden journey into the heart of the Romulan Empire--and the U.S.S. Enterprise's desperate attempts to discover the reasons for his mission there.

Join now with Captain Picard, Lieutenant Commander Data, and the rest of the Next Generation crew on a voyage of unsurpassed adventure, a voyage that brings them to the edge of history--and forces them to confront a shattering betrayal!