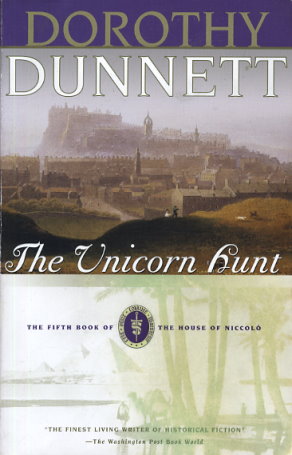 Share:
With the bravura storytelling and pungent authenticity of detail she brought to her acclaimed Lymond Chronicles, Dorothy Dunnett, grande dame of the historical novel, presents The House of Niccola series. The time is the 15th century, when intrepid merchants became the new knighthood of Europe. Among them, none is bolder or more cunning than Nicholas vander Poele of Bruges, the good-natured dyer's apprentice who schemes and swashbuckles his way to the helm of a mercantile empire.

Scotland, 1468: a nation at the edge of Europe, a civilization on the threshold of the Modern Age. Merchants, musicians, politicians, and pageantry fill the court of King lames III. In its midst, Nicholas seeks to avenge his bride's claim that she carries the bastard of his archenemy, Simon St. Pol. When she flees before Nicholas can determine whether or not the rumored child is his own -- or exists at all -- Nicholas gives chase. So begins the deadly game of cat and mouse that will lead him from the infested cisterns of Cairo to the misted canals of Venice at carnival. Breathlessly paced, sparkling with wit, The Unicorn Hunt confirms Dorothy Dunnett as the genre's finest practitioner.