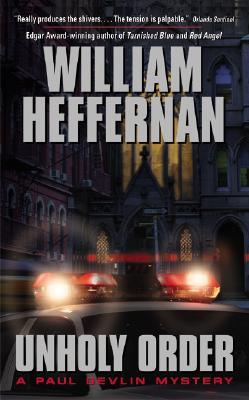 
The leader of an elite squad of NYPD homicide detectives, maverick man-hunter Paul Devlin returns in an electrifying novel of suspense that plumbs terrible secrets hidden in the untouchable world of the righteous.

UNHOLY ORDER
No evil is more frightening than
the horror tha masquerades as good.

In a city as huge and unpredictably dangerous as New York, murder is sadly unremarkable. A new slaying, however, has tossed the red ball squarely in Detective Paul Devlin's lap. This victim is a woman, her throat and midsection viciously slashed open, a lethal dose of heroin found in her system. But this outrage is different. This corpse was that of a nun.

With the press turning the killing into a carnival -- with blistering heat coming down from the mayor's office, One Police Plaza, and the Archdiocese -- Devlin needs to find a murderer, and fast. But suddenly walls are being erected in his path, and powerful threats are being made to stall an investigation that is leading Paul Devlin and his people in a shocking direction: into the secret, fortified heart of the Catholic church itself -- and toward a terrifying conspiracy cloaked in silence, piety, and blood.

And death keeps coming. A seemingly uncontainable plague of carnage is cutting down those who have dedicated their lives to a fierce, vengeful God. As the body count grows-as the pieces of a fiendishly twisted puzzle slowly fall into place -- Devlin realizes that the web of terror extends wider than anyone ever imagined, into virtually every level of society. In domains sacred and secular -- among the city's top cops, priests, and politicians-no one is incorruptible. And no one is safe, least of all Paul Devlin, as a desperate hunt for a nightmarish truth sparks a bloodchilling vendetta aimed at one dedicated policeman . . . and those he loves most dearly.

Never before has the dark, urban wasteland of cops and maniacs been more vividly portrayed -- and never have the saber-sharp storytelling skills of Edgar Award winner William Heffernan been as expertly wielded -- than in this intensely riveting tale of sin and sacrifice that solidifies the author's standing as a true master of the crime thriller.