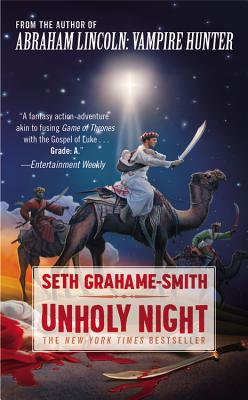 Share:
They're an iconic part of history's most celebrated birth. But what do we really know about the Three Kings of the Nativity, besides the fact that they followed a star to Bethlehem bearing strange gifts? The Bible has little to say about this enigmatic trio. But leave it to Seth Grahame-Smith, the brilliant and twisted mind behind Abraham Lincoln: Vampire Hunter and Pride and Prejudice and Zombies to take a little mystery, bend a little history, and weave an epic tale.

In Grahame-Smith's telling, the so-called "Three Wise Men" are infamous thieves, led by the dark, murderous Balthazar. After a daring escape from Herod's prison, they stumble upon the famous manger and its newborn king. The last thing Balthazar needs is to be slowed down by young Joseph, Mary and their infant. But when Herod's men begin to slaughter the first born in Judea, he has no choice but to help them escape to Egypt.

It's the beginning of an adventure that will see them fight the last magical creatures of the Old Testament; cross paths with biblical figures like Pontius Pilate and John the Baptist; and finally deliver them to Egypt. It may just be the greatest story never told.