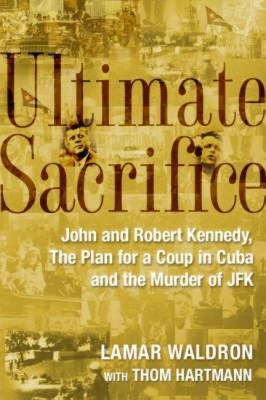 Share:
Drawing on seventeen years of research, thousands of recently declassified files, and dozens of interviews, Ultimate Sacrifice re-creates and, in many ways, rewrites the crucial period of our history leading up to November 22 1923. In the process, this groundbreaking account provides the missing pieces to the greatest tragic puzzle of post-war America: the true circumstances behind the assassination of President John F. Kennedy. Ultimate Sacrifice details a previously unknown ?Plan for a Coup in Cuba? authorized by President John Kennedy, run by Attorney General Robert Kennedy and set for December 1, 1963. The Kennedy plan, unique and different from ant previously disclosed operation, was ? as detailed in a Joint Chiefs of Staff memo ? to have included a ?palace coup?, a provisional Cuban government and, if necessary, a ?full-scale invasion? by ?invited? US military forces. The CIA?s code name for their part of the operation, AMWORLD, has never previously surfaced in any government investigation, nor in any book or article, making it one of the most covert operations in United States history. Ultimate Sacrifice will detail how the Kennedy plan was penetrated by three mafia godfathers ? Carlos Marcello, Santo Trafficante, and Johnny Roselli ? being vigorously pursued by Attorney General Robert Kennedy, along with a dozen of their associates, six of whom were also working on the Coup plan. The crime bosses then used parts of the Coup Plan/AMWORLD to arrange JFK?s assassination in a way that would prevent a truly thorough government investigation in order to protect the Coup Plan, its participants, and national security. By using the secrecy surrounding the Plan, the mob bosses would target JFK not only in Dallas but in two earlier attempts, one in Chicago on November 1 and them one in Tampa on November 18, which Ultimate Sacrifice reveals for the first time in any book. Ultimate Sacrifice has finally pieced together the whole story by building on the work of the seven governmental committees that have investigated aspects of the assassination, on the work of former government investigators, and on the four million documents that were declassified in the 1990s, in addition to exclusive interviews with dozens of witnesses and participants including Secretary of State Dean Rusk, Press Secretary Pierre Salinger, and the Kennedys? closest Cuban exile aide, Harry ?Ruiz? Williams.