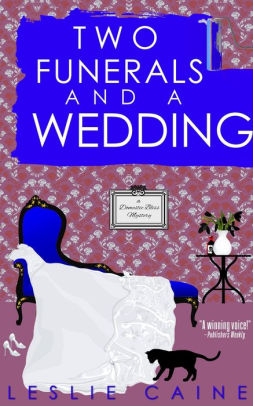 “Sparkles with charm, design lore, and a sleuth with a great mantra. Cozy fans will embrace the Domestic Bliss series.” —Carolyn Hart, Edgar Award-winning author of Letters from Home

“TREND: For killer decorating tips, pick up Death by Inferior Design…advice is woven into this whodunit featuring rival designers as sleuths.” –House and Garden Magazine


With her nuptials less than 3 weeks away, Erin Gilbert is designing a wine cellar for Aunt Bea—Steve Sullivan's honorary “Aunt” (who Steve privately calls “the loon from the family closet”). But Erin, not as much of a skeptic as Steve, fears that Aunt Bea's prediction that they “unleashed an evil spirit” during construction in her cellar could come true!!

Drew, Steve’s best man, loses all of his money and Steve loans him what he needs to finish his restaurant, which touches off a pre-wedding argument between Gilbert and Sullivan. Drew, now a reckless ladies’ man and depraved partier, seems to be intentionally exacerbating the tension between bride and groom…

When the new chef, the colorful Lucas LeBlanc, crashes the couple's wedding shower and brings his own hors d'oeuvres to serve, Erin’s wedding planner collapses—his face bright red—and dies. The police discover a sapphire necklace in his pocket—a family a gift from Aunt Bea that has caused family disquiet before…and suddenly, everyone’s a suspect!!

If she doesn’t find the real killer soon, Erin fears that the wedding she so carefully planned, will end in ruin!