Twice Upon a Marigold — Jean Ferris 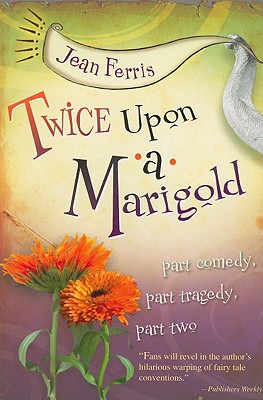 Since Queen Olympia's fateful fall into the river, newlyweds Christian and Marigold have been living happily ever after. And they had every intention of keeping it that way--until they find out that Olympia may not be as gone as they thought.
Turns out Olympia is alive and well in a faraway village, having lost her memory after her ill-timed tumble. But one day she awakes and remembers her previous glory as queen. Accompanied by Lazy Susan (Sleeping Beauty's slacker sister) and Stan Lucasa (a gentleman with a surprising destiny), Olympia returns, determined to take back the kingdom. Yet, thanks to a cast of familiar characters, grabbing the throne may not be as easy as Olympia thinks!
Reviews from Goodreads.com