Turn The Other Way — Stuart James 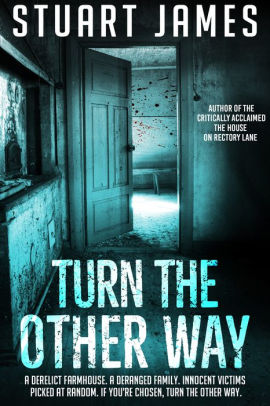 Sometimes revenge is the deadliest game of all.A derelict farmhouse in the English countryside.A deranged family. Innocent victims picked at random.If you're chosen, Turn The Other Way.Simon Bairstow is a top London surgeon. He's performed dozens of life-saving operations. But something goes horribly wrong. The machine Eve Johnson is attached to flatlines, and suddenly her parent's world has collapsed.They're hellbent on revenge, someone to answer for the horrific error that's been made.Noah and Jess are driving home on a busy dual carriageway and stuck in traffic. They hear thumping coming from the back doors of the transit van in front of them. When Noah steps out onto the road, he hears muffled screams. He opens the back doors and what he sees shocks him to the core.The van pulls off, spilling Noah onto the road.Ignoring his wife's plea to leave it, he hits the accelerator in pursuit of the van.Chloe's parents are missing. She hasn't seen them since they left the party in Hampstead on Friday night. She needs answers, deciding to take matters into her own hands. A serial killer is stalking the streets of Islington in North London late at night leaving his victims in a horrific way. The press have dubbed him the Angel Attacker.A terrifying tale of revenge with a twist that will hit you like a sledgehammer.What authors have said about Stuart James.Lisa Hall, author of The Party and Between You and me: Tense and thrilling, with an ending you won't see coming. John Marrs, author of The Good Samaritan and The Wronged Son: Fans of Mark Edwards will very much enjoy. Definitely a writer to look out for.Natasha Harding, The Sun newspaper: A spooky read that will grab your attention from the very first page. Jennifer Jayne, USA Today best selling author of Malice, Disturbed and The Stranger: Great job. Well-crafted, deliciously twisty and kept me glued to the pages.
Reviews from Goodreads.com