Trust in Me — Carla Buchanan 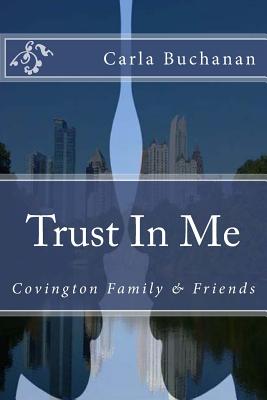 Brooke Covington is a member of the illustrious and influential Covington Family. She is young, sexy, smart, and has everything going for her as far as her career is concerned. However, her private life is far from okay. An unfortunate event after a New Year’s party has left her faith in the opposite sex fractured. In an effort to get away from the obsessed man who ruined her trust and threatened her future, she leaves Long Beach and heads back to her suburban childhood home in Atlanta, GA in the hopes of some peace of mind and have a little fun with her best friend. Little does she know that her return to her hometown will bring her face-to-face with the boy she previously loved and once saved her life. *** Reid Burke is a popular doctor as well as one of the most eligible bachelors in Atlanta. Yet his looks and status won’t save him from the humiliation and heartbreak that come from finding his wife-to-be in the arms of another mere hours before they are to marry. The public embarrassment of that event leads Reid to a place in which he thought he’d never return. While there, he is able to reflect on his choices and become reacquainted with the daughter of his mentor who just happens to be the chubby girl he saved from the community lake nearly 18 years ago. *** A series of up and downs, a string of obsessive exes, and a couple of near death experiences sends them on a journey that tests their faith in each other and forces them to face the issues they have with trust, fidelity, and their own inner uncertainties about love and relationships. When they come out on the other side, will they go their separate ways or will they learn to trust in one another for their own sanity and their future? This book is the debut novel by new author of Adult Contemporary Romance, Carla Buchanan.
Reviews from Goodreads.com