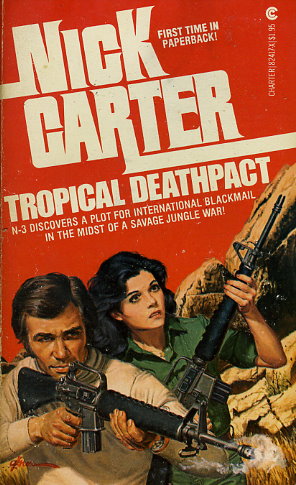 When a U.S. agent notifies his boss that something is brewing in Central America, Nick Carter is sent down to investigate, but not before his contact is stopped dead by a quick blast from a lethal can of aerosol.

Nick lands in the middle of a three-way civil war where double-cross is the rule and treaties last for a day. Meanwhile someone is trying to get hold of highly sophisticated and deadly Red-Eye missiles.

Whoever gets them can wrap things up very nicely . . . and then put the missiles to other uses. N-3's job is to prevent that. But first he has to get out of a raging guerrilla war and get answers to a few questions: why is the right-wing dictator Obregon supplying guns to his Communist enemies? Why are Cuba and Russia watching so closely? Who will be the victim of the final deception?