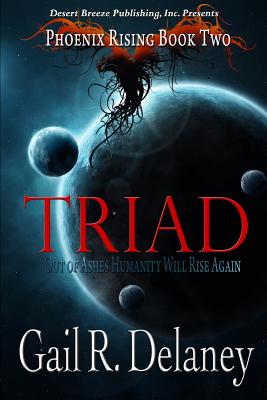 They were created by the sickest, most twisted mind of all the Sorracchi to be super-soldiers, mindless, emotionless, A-moral killing machines -- but something went wrong. Compassion, affection, and curiosity are born in the human psyche and if it is strong enough it cannot be denied. But, it can be punished. The Triadic were placed in stasis for nearly a decade until their "teacher" could figure out how to fix them and strip them of their human hearts.

Before the War Katrina Bauer had spent her life tucked away from the world, hiding her intelligence and her skills to avoid the seeking eyes of the enemy. Now in Alexandria, working with men like Victor, Michael Tanner, and an elite scientific team reporting directly to President Nicholas Tanner, she and her brother Karl have found purpose and a sort of family.

In the dead of night she is snatched away and now must find a way to teach three powerful, frightening men they no longer need to live as slaves. The leader, the soldier, and the balance. They are lynchpins to each other. As their personalities are allowed to emerge, one will grow to be a man Katrina no longer fears, but might even love.