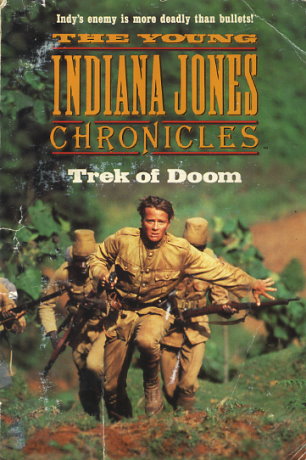 The chance to drive the Germans out of Africa sounds like a dream to Young Indiana Jones and his pal, Remy. Not only are they leaving the nightmare of the war in Europe, but they're suddenly officers. Their luck seems too good to be true...And it is!

Major Boucher, their commanding officer, is a stickler for discipline. And he can't stand Indy. But when Indy's company goes on an expedition across the continent, the major is only part of the problem. Indy discovers a killer much more powerful than German gunfire. One by one the killer picks off its victims -- black, white; officer, soldier; young, old. It takes many forms, but it adds up to one thing...disease!

Maybe Indy can survive Major Boucher, but what about the unseen killer?

Young Indiana Jones -- you've seen him on TV in The Young Indiana Jones Chronicles, traveling the world as a kid and a teen, encountering some of the best minds and biggest events in history. Now read about his grueling march through the jungles of the Congo during World War I. Based on the television episode "German East Africa, December 1916."
Reviews from Goodreads.com