Treasures of the Twelve — Cindy Lin 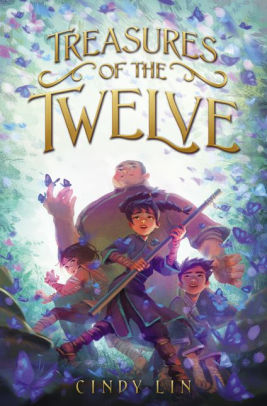 Bursting with heart and packed with exciting new places, dangerous obstacles, and mysterious powers, Cindy Linâ€™s sequel to The Twelve is a page-turning race against time thatâ€™s perfect for fans of The Zodiac Legacy and Spirit Animals series!
When Usagi first met the fabled Heirs of the Twelve, she had just one goal: saving her sister, Uma.
But despite increasing her zodiac powers by becoming the new Rabbit Warrior Heir, Usagiâ€™s attempts to rescue Uma have failed. Soon Usagi and the Heirs realize that to truly free those they love from the Dragonlord, they must take on a dangerous task: finding the ancient treasures of The Twelve.
Hidden away by the last zodiac warriors, these treasures have miraculous powers. Their wielder can create massive sandstorms, bring the clouds down to earth to enshroud everyone nearby in a thick fog, or even grant any wish they desireâ€”for a brief time.
Usagi and the Heirs must journey farther than they ever have before and take on the riddles and obstacles that await them on their hunt for the ancient relics.
But will they find them in time to save Uma?
Reviews from Goodreads.com